Ok, so we have done a few games and puzzles in Scratch. How about creating a game  we have not done before from the ground up – outlining it, designing it, prototyping it and then making it work?

Ever played Battleships a two player game where each opponent guesses the location of the other player’s ships? When you have hit all your opponent’s ships or your opponent has hit yours the game ends. There are different size ships and there’s sound effects to boot! 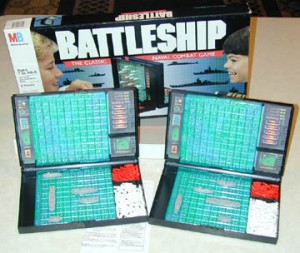 Its a simple game, surely we can do it in Scratch right!  – well lets think it through….

So here’s some food for thought:

Lets see if we can work this up over the  next few weeks, maybe there’s a few groups that need to work together here to come to the final solution – including the Mentors!